MAURITIUS: THE CONTRIBUTION SOCIALE GENERALISEE WITHIN THE PENSION SYSTEM

Effective as from September 2020, a new pension scheme called Contribution Sociale Généralisée (CSG) or Generalised Social Contribution is replacing National Pension Fund contributions. While the standard Basic Retirement Pension of MUR 9000 will continue to be paid, any increase in benefits will be paid through the CSG, with the first benefits under CSG being provided as from July 2023 to individuals aged 65 and over, as supplement to the standard Basic Retirement Pension. The design of the CSG has been subject to controversies, with question marks over the sustainability of the CSG in its present form.

National Savings Fund: The National Savings Fund (NSF) provides a lump sum at retirement age and is a defined contribution scheme funded by contributions from employees and employers. The fund is compulsory in respect of all citizen employees of the public and private sector. The rate of contribution from citizen employees is 1% of the basic salary and that from employers is 2.5% of the basic salary of each employee. There is a maximum contribution limit, with the ceiling of insurable monthly salary standing at MUR 19990 in September 2020. The lump sum provided on retirement is determined by past contributions and by the performance of investments of the fund.

Portable Retirement Gratuity Fund: The Portable Retirement Gratuity Fund (PRGF) generally applies to private sector employees other than those already covered by a private pension scheme. The purpose of the PRGF is to provide for the payment of a lump sum on the retirement of employees commensurate with their terms of service throughout their working life. The obligation by employers to make compulsory payments of PRGF contribution has been postponed to January 2022, except in cases of employment termination which would trigger a legal obligation to make compulsory contributions in respect of past services of the employees.

National Pension Scheme: Contributions to the National Pension Fund (NPF) have been abolished as from 1 September 2020. The NPF was meant to provide for the payment of an income stream to private sector employees when they retire. Up to August 2020, the NPF was funded by mandatory contributions from employees (3% of basic salary) and from employers (6% of basic salary), as well as by the returns from the investments of the fund. There was a maximum contribution limit, with the ceiling of insurable basic salary standing at MUR 19990 in August 2020.

Participants to the CSG

The CSG applies to all employed and self-employed individuals, including non-citizens and persons aged 65 and above, with the exception of the following:
• Non-citizen employee of an export manufacturing enterprise who has resided in Mauritius for a continuous period of less than 2 years,
• Non-citizen employee of a foreign contractor engaged in a project which is at least 50% funded by a foreign country,
• Persons taking part in a training scheme with a view of facilitating the placement of jobseekers in gainful employment,
• A non-executive director of a company.

At the time of writing, no guidance has been provided as to what would constitute ‘additional remuneration’ and what bonus would be excluded from remuneration.

The rates of CSG are:

*percentage of the monthly remuneration of the employee

Self-employed individuals will pay a compulsory nominal amount of MUR 150 as CSG contribution. Under the NPF system, to qualify for contributory pensions, self-employed or non-employed persons were able to contribute on a voluntary basis to the NPF.

Effect on net salaries in the private sector 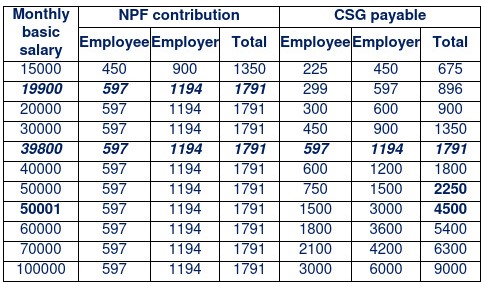 Businesses having most of their employees on middle or higher basic salaries would need to budget for a higher amount of CSG payment as compared to the contribution payable under NPS.

Pay as you go system

The NPF was funded by mandatory contributions from employees and employers, as well as by returns from the investments of the fund. The NPF, dating back from 1976, is currently the main institutional investor in Mauritius, holding some 6% of the stocks listed on the Stock Exchange of Mauritius, or the equivalent of 25% of the GDP of Mauritius.

Contrary to the NPF, the CSG is a pay as you go system, similar to the Basic Retirement Pension. There is therefore no link between the amount contributed by each individual and the amount subsequently available as benefits to the individual from the age of 65.

Sustainability of the CSG

Several experts have questioned the sustainability of the CSG in its present form. According to actuarial estimates, CSG pensions may be expected to cost some MUR 11 billion in the first fiscal year of payment as from July 2023. According to Government’s budgetary estimates, the CSG is expected to generate revenues of between MUR 3 billion and MUR 3.6 billion in the fiscal year 2020-2021. While the CSG sets out to provide for a more comfortable safety net for Mauritius resident individuals aged 65 and above, it may not be sustainable in the medium term, if the CSG pension is to keep pace with growth in nominal salaries and inflation, unless an increasing share of CSG contributions are derived from much broader sources of income and gains, including general taxation.

DTOS provides valuable insights and value-added services to businesses and individuals with regard to their evolving present and future needs. Should you have any query in relation to the topic covered and require any assistance, please do not hesitate to contact us. We shall be pleased to assist you.

• Apply the prescribed due diligence rules and completing the
‘Self-Certification’ exercise;

• Design and implement internal processes and procedures to
ensure compliance under FATCA/CRS;

• Assist in compiling, assessing, validating and reporting the
reportable information under FATCA/CRS to the competent
authorities in XML format.